Cut Through the Bone 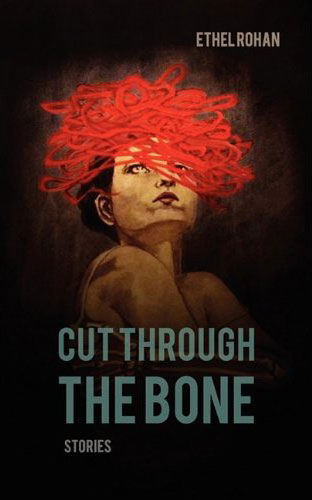 A collection of thirty intense and powerful very short stories that center on missing parts, incompleteness, and our need to be connected and whole.

“Whether they win or lose their battles, many of Rohan’s characters share Matt and Joyce’s quiet, impossible hunger [from the title story] and the sadness that accompanies it. Rohan never looks past that sadness: she is mindful of her characters’ plights, her prose guided by a careful, focused empathy. And as to the question of how, finally, one prevails–how one lives with such space, or bridges the gap between the real and the imagined–she gives us an answer … Which is to say: fake it till you make it.”

“Filled with spot-on details and deceptively simple sentences, Rohan’s stories are, more than anything else, about loss — of children, both born and never conceived, spouses and lovers, parents, body parts, happiness, dreams, self — and about the odd, endearing, and desperate ways that people fill the void or ignore it: by befriending balloons and eating too many nuts, by inventing companions and alter-egos that become more real to them than reality.  They may seek complicity in these imagined worlds, may even occasionally get it — a husband coddles his wife’s doll, a massage therapist massages a ‘ghost’ limb — but, most often, that complicity is sought only from us, the readers, and we are fortunate, indeed, to have been invited.”
— Lori Ostlund, author of After The Parade

“Cut Through the Bone is full of phantom limbs and phantom lives. These stories create a sense of loss in the reader, an ache, but thankfully they avoid dull cynicism. Instead, they bear witness to the difficulty of living for oneself while sacrificing for others. In one story a woman pleads, ‘I’m here though? Tell me I’m here.’ Ethel Rohan’s stories are like testaments to all the women and men who’ve asked the same thing of the world. Those folks remain unseen to most, but this truly talented artist isn’t blind. Ethel Rohan is one hell of a writer.”
— Victor LaValle, author of The Devil In Silver

“In Cut Through the Bone, Ethel Rohan renders, with precision and beauty, lives engulfed by loneliness and loss. Rohan creates worlds at once tremendously recognizable and tremendously strange, and the voices of her characters lingered in my mind long after I finished the final story. This is a marvelous collection, filled with moments that startle and shatter.”
— Laura van den Berg, author of Find Me

“The women of Cut Through the Bone are frequently disappointed — by their jobs, by their husbands and fathers, by their own faces and bodies and temperaments — and also disappointing, to those who they might love, to those who might love them back. Inscribing their fates, Ethel Rohan writes, ‘She is a fool. We are all fools,’ and of course she is right. She writes, ‘God is a fool,’ and of course she is not wrong. Still, it is not all bleakness, for here there is still some true tenderness, there some kindness left unpunished. And so Rohan’s fools go on, tricked once again into believing in the rewards of this promised world, of all the good and the bad and the absolutely human that awaits them—and us—when at last we reach not the end of things but the very center.”
— Matt Bell, author of Scrapper

“Each piece in Ethel Rohan’s Cut Through the Bone is as eerily beautiful as the realistic baby dolls in her story “Lifelike”; and you will find yourself, on multiple occasions, believing that you can hear the stories breathing. In this unforgettable collection, Rohan reveals her mastery in finding the danger of ordinary objects, the way they come alive when her characters hold them in their hands. This is an unsettling and mesmerizing book.”
— Kevin Wilson, author of The Family Fang

“I keep thinking of more and more adjectives in an attempt to describe Ethel Rohan’s moving debut collection, which is at turns beautiful and inventive, tender and absurd, quirky and heartbreaking, dark and strange and devastating.”
— Michael Kimball, author of Big Ray

“Ethel Rohan knows a thing or two about singing with the dragonflies, smashing the mayonnaise jar, and biting Fat Greta. In less than a hundred pages, she offers thirty sharp and shapely stories of Shatter and Scraps, of Mirror and Make Over, of Fee Fi Fo Fum At the Peephole. Like one of her protagonists, I spent a few minutes in the white space, listening for the familiar sound of the car’s engine, of the bottles hitting together.”
— Kyle Minor, author of Praying Drunk

“Ethel Rohan’s women, despite their wounds, are strong of spirit. She captures their resilience and their surrender in prose that is lean and utterly unflinching.”
— William Walsh, author of Re: Telling