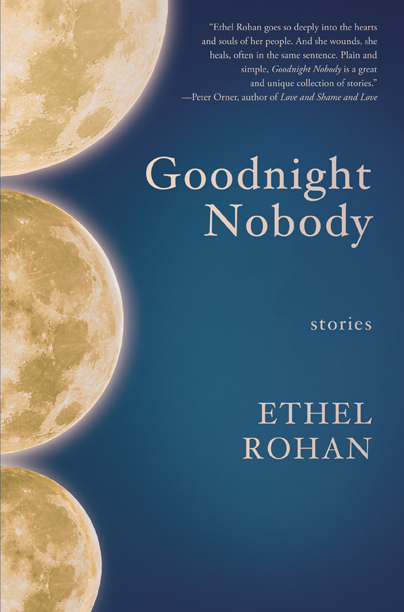 Ethel Rohan knows how to startle the dark. Her compassionate intensity illuminates the prose and the people of Goodnight Nobody—thirty short stories that are as sharp as they are earnest, luminous stories that reflect with sparse elegance our humanity and our often brokenness. As the moon circles the Earth, always separate but always drawn near, so too the cratered, alienated characters of Goodnight Nobody orbit others, striving to connect. By turns heartwarming and heartrending, this collection constellates ordinary lives gone wrong—the disgraced Dublin Reservist; the wife jealous of bees; the pyromaniacal mother craving warmth; the one-armed identical twin facing incompleteness; the photographer striving for the perfect image before losing her sight; and a host of others in trouble. Lives gone wrong, but always trying to get right.
PRAISE for Goodnight Nobody:

“Fans of Ethel Rohan’s writing will find, in her latest and outstanding collection, Goodnight Nobody, a writer who has never been more intelligent, more graceful, more moving. Whether it’s a young girl torn between a loving father and an abusive mother, or a photographer who is losing her eyesight while her husband bears witness, or a woman who wants nothing more than a sign from her husband that he sees her, Rohan writes about people searching for a place to belong or a place to breathe or simply, a place to be. In Rohan’s eminently capable hands and words, these stories give us that hope that these searching people she writes will find everything they want or need.”
—ROXANE GAY, author of Hunger and Bad Feminist

“In Ethel Rohan’s Goodnight Nobody, while breaking into her own home, a young woman unknowingly slices open her arm. This image is quintessential Rohan—characters trying, and often failing, to gain access to both safety and family, rendered with prose so swift, eviscerating, and brilliant that readers don’t realize they too have been opened up. Rohan elegantly weaves tattooed women, Irish Army reservists, identical twins, a missing monkey, traumatized girl scouts and more, into a world we all recognize, fear, and can’t help but love.”
—SIOBHAN FALLON, author of You Know When the Men Are Gone

“Ethel Rohan speaks in many voices, all of which need to be heard. She goes so deeply into the hearts and souls of her people. And she wounds, she heals, often in the same sentence. Plain and simple, Goodnight Nobody is a great and unique collection of stories.”
—PETER ORNER, author of Last Car Over the Sagamore Bridge

“Early in Ethel Rohan’s arresting collection, Goodnight Nobody, we encounter a character staining glass, ‘playing with light and dark and crooked and jagged, wanting the window to finish misshapen and almost frightening, gorgeous on the edge of grotesque.’ I couldn’t help but conjure that artist and her approach to her work as I simultaneously devoured and savored this book of beautiful and breathtaking stories. Each gem-like piece is capable of dazzling you, but these stories might cut you, too. They will without a doubt leave you unsettled.”
—CHAD SIMPSON, author of Tell Everyone I Said Hi